The Huntress (Year One) Part One

Over a year ago I took three "Huntress" comic books, fused their dialogue together with dialogue and ideas of my own and came up with a script.
Then using Final Cut, Poser, Affinity Photo, SoundDogs.com, Pond5.comand some amazing voice actors, I came up with part one of a short animated film.
I'm working on part 2 now. Please subscribe to the YouTube channel and leave a like and a comment. Let me know what your favorite scene was.

Thank you Jennie West, Kathy Zimmer, Judith Colonna for proofreading the script for me. :)
~TD

A scene from the Darkroom

I've been in Nevada for almost a year now, and in those 12 months, I've been working on music every night. So as you can imagine I've compiled a large arsenal of songs. I'm going to make those songs available to all my timothydark.net VIP members starting in November.

This song is entitled "Roll Call' for now. I don't want to give away the big surprise that's coming by revealing the true title. You all know there always has to be some mystery behind whatever I do.

So one day while scrolling on Instagram, I came across a video on David Maldonado's page. If you don't know who he is, he's the guitar player/producer for the band JMI. (You should really check out their music) https://soundcloud.com/junkmadeill

The video was a remake of Stevie Wonder's Superstition, by an artist called Dean Gray. 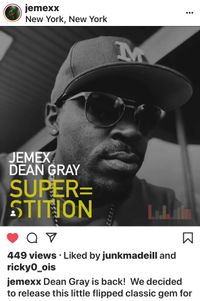 I was impressed by the production (and Dean's vocals as well) and had to let David know.

jemexx: Thanks! I've got a treat for you too, my friend

In a few hours, I received a track from Dave in my mailbox. I didn't really know what to expect.

The only words on it were "thoughts?' 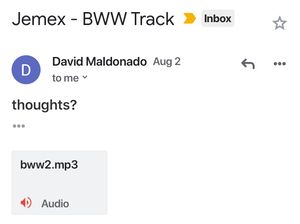 When I opened the E-mail and heard the track I was like, Fuck, this is totally me!"

I played it all the way through, and immediately went to work.

I opened the track up in Logic Pro and started writing. I played the beat again and waited for it to talk to me.

The first time it was very quiet. All I heard was slight mumblings of words. The third time or forth time I played it I heard the words "Runaway Train"

Now that I had the title, I could begin to listen for the chorus. That came to me as clear as a bell on around the fifth or sixth play. By about thirty or forty plays, I had writtten two verses. I played it back a few times and walked around the room, which is part my usual songwriting ritual.  It felt like a full song. I just needed a bridge.

Once that was completed I sent the takes to Dave. I really wanted to do a song with their lead singer Jaime Lynn. but I wasn't sure how to fit her in on this one. I knew the next track I would most definitely have her as the main feature. But it all worked out in the end.

Now when I produce music I usually add some live guitar or bass to my tracks.

So it's always a blessing to have

The Guitar Goddess, Lisa Bianco and The Baryshnikov of Bass, Carl Gibson as friends.

But Dave made sure this track had his live guitar playing....

and Additional Vocals by no other than (drum roll, please) Jamie Lynn.

I wish I had video of Jamie singing the bridge, it really added a totally angelic flavor.

Once he sent me a rough mix, I started a contest on Instagram (if you're not following @timothydarkmusic
on Instagram, please do) where I would give one letter of the title per day and ask people to guess the title.

Which as you all know by now is "Runaway Train"

While I was waiting for the final master of the track, Dave and I decided what the single cover
was going to look like. It was just a matter of me finding someone who could do it justice.
But like most questions I've had in my life, the answer came to me. My friend Steph had just posted a
picture of her daughters artwork on Facebook. But her daughter was really busy and couldn't fit it into her schedule but her sister Isis Stephens took over the job and it was ????

I'm really proud of this single, because I finally had the chance to record a song with the entire crew of JMI and also give a job to a young and up and coming artist.

So please, while you're here, download the track, https://timothydark.net/single/2079/runaway-train-feat-jmi

grab some merch, check out the pics and enjoy the full TD experience.

These are The Last Days of Dark

So I accidentally deleted my Instagram. I was mad at first, but now I think it was a total Freudian slip. All the people that I wanted to delete but didn't want to spend the whole day finding and deleting, and all the people who unfollowed me but I kept because I didn't want to be petty-are gone. There are some people who I met and we only had an Instagram connection and I'm sad to have lost a lot of them. "The Freudian Purge" has also given me a chance to start a new way of posting. I now have designated days for different things. For instance, Superhero Sunday, Music Monday, etc.
When I fall behind, I just assign said event to a different day. It keeps things interesting for me, and hopefully for the people following as well. I also figured out how to add a shopping cart to my posts, which was the goal in the first place.
There are those who I want to reconnect with but can't find. If you're not following me on Instagram and you're reading this, follow me. I miss you lol I promise, I'll follow back.

These are The Last Days of Dark

You are visitor number: 386